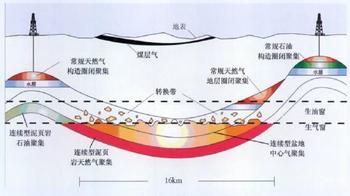 Earlier this year, 16 companies obtained 19 exploration rights in the second round of shale gas tenders of the Ministry of Land and Resources. However, these 19 blocks have now become "hard bones." These companies are not easy to pick up.

On July 16, a number of people from the Ministry of Land and Resources' Oil and Gas Resources Strategic Research Center disclosed to the reporter of the â€œDaily Economic Newsâ€ that the Ministry of Land and Resources convened a meeting of the winning companies in the above 19 blocks in Beijing to understand the exploration progress of each enterprise block. The situation and the actual problems.

According to public information, as of June this year, except for the drilling project of Huadian Coal Group Co., Ltd. located in the shale gas block in Liyang, Guizhou Province, other successful companies are developing exploration plans. Exploration experts believe that the first and second rounds of shale gas tender blocks are all located in areas that have not been registered with â€œthree barrels of oilâ€. The geological data, resource conditions, and infrastructure of these 19 blocks are generally poor and there are few geological data available. The 16 successful bidders themselves lacked experience in oil and gas exploration. In addition, exploration and development costs are too high, and most of the successful bidders are unable to obtain the funds for exploitation, and the slow progress is reasonable.

According to relevant persons from China Coal Geological Engineering Corporation, in the second round of tendering, the company won two bids for the exploration mission, which was accompanied by a relatively low experience in shale gas exploration. The entire geological exploration required cost. A lot of time can be determined on the amount of gas, business prospects and other important data, while other companies also have this situation.

According to the regulations, the exploration period for the successful bids of 16 companies is 3 years, and the Ministry of Land and Resources needs to track the progress of the relevant block exploration and punish those who do not complete the commitment. At the end of June, the Ministry of Homeland convened the above-mentioned 16 companies to hold a meeting in Beijing. According to relevant sources, the companies at the meeting reported on the progress of their respective exploration and development. Traditional oil and gas companies such as PetroChina also introduced related mining experience.

The risk of poor blocks is high. Tian Ting, an analyst at the China Energy Network Research Center, believes that the 19 blocks are generally poor in geological data, resource conditions, and infrastructure. The Ministry of Land and Resources did not provide block resource value judgment data, making it difficult for the successful bidder to effectively judge the quality of the block and the amount of resources. The output is difficult to predict, and the risks of large investment and development of the company are large.

None of the 16 companies had experience in oil and gas and other traditional oil and gas development. Two of them were private enterprises, and four of them were established within the first three months of bidding. Most of them did not possess shale gas exploration. The development of technology. Tian Ting said that the above situation caused the company to have to transfer or seek cooperation from other companies for various reasons.

"These companies only got the shale gas property right certificates in March. Now the progress is not very rapid. It can only be said that the development is stable and geological exploration has its own laws. This is also a normal situation." The Ministry of Land and Resources's Oil and Gas Resources Strategic Research Center The person said.

An exploration expert of Sinopec said that the geological data of 19 blocks are unclear, the investigation will take at least six months, and drilling will only be possible after geophysical exploration. This also involves road-building transportation equipment and the design of exploration plans, all of which are time-consuming.

According to the bids of the winning bidder, 19 blocks will invest 12.8 billion yuan in exploration funds within three years. The average total investment for each block is as much as 670 million yuan, which is much higher than the minimum tender requirement (0.9 billion yuan).

Tian Ting believes that investment commitments are too high and will affect the subsequent benefits of the company. In the current shale gas well production is generally low, geological resources can not be determined, the large-scale industrialization of shale gas is difficult to achieve in the short term, companies rely on the central government subsidy of 0.4 yuan / cubic meter, far from the hedge in the near future The exploration and investment costs, there is a huge financial pressure for exploration and development.

Breaking the monopoly of the three major oil companies According to the survey and evaluation of the shale gas resources potential of the Ministry of Land and Resources, China has initially optimized 180 favorable shale gas blocks, of which 77% of the beneficial block area and 80% of the resource potential area are in existing Within the oil and gas blocks.

For a long time, China's oil and gas exploration areas have been almost entirely occupied by PetroChina, Sinopec, and CNOOC, and the major basins are even covered. In many of these areas, the amount of long-term input is very small. There is no new discovery and no work is done, but they do not withdraw. This makes it impossible for other companies to enter into new explorations.

The above-mentioned Sinopec exploration experts stated that the first and second batch of shale gas tender blocks were all located in areas that were not registered by the three major oil companies. It is clear to the industry that the main reason for not being occupied is that the conditions for oil and gas conservation are not good. At least for conventional oil and gas, it is difficult to obtain the oil and gas reserves for economic development. This is the conclusion drawn after more than 60 years of repeated work.

Experts said that the shale gas tender block currently being drawn is not an ideal constituency for non-oil companies that have just started their own businesses. In the first tender, half of the bids were circulated. Some of the powerful private oil companies in the second tender did not participate in the bid. This may be the reason. For shale gas, the oil and gas geological conditions and construction conditions of these blocks are generally superior to the unregistered blocks on the periphery of the basin. The bidding of these sites as new exploration blocks will attract more attention. This will break the monopoly of the three major oil companies on the block.

We have been in the research, development, sales of different Water Treatment Chemicals since our foundation, many  of them are hot selling products, such as sodium chlorite, chlorine dioxide, sodium pyrosulfite, polyaluminium chloride, sodium bisulfate, we also supply cleaning agent, antimicrobial agent to customers from the USA, Japan, South East Asia, South America, Middle East etc.